Chronic illnesses are most severe in low-income countries

The WHO states that the widespread occurrence of chronic illnesses in developing countries can challenge the efforts to reach the sustainable development goal of reducing the number of premature deaths by one third by 2030.

More than eight out of ten deaths caused by chronic illnesses occur in low- or middle-income countries. That number can increase if the current trend continues. The children, adults and elderly in these countries are at greater risk of developing chronic illnesses.

This applies in particular to the chronic illnesses linked to lifestyle. Unhealthy diets, physical inactivity, tobacco smoke and excessive consumption of alcohol occur more frequently in developing countries, which results in the people of these countries being more prone to developing chronic illnesses.

In addition to the lifestyle being generally unhealthier in developing countries, the costs of health care and medicine are also relatively more expensive. The costs of these can often ruin the budget of an entire household, which in turn leads to worse living conditions for the remaining occupants, which in turn creates a greater risk of developing chronic illnesses and dying prematurely. It is a vicious cycle that seems hard to end.

What is a chronic illness?

Cardiovascular disease is the cause of most deaths 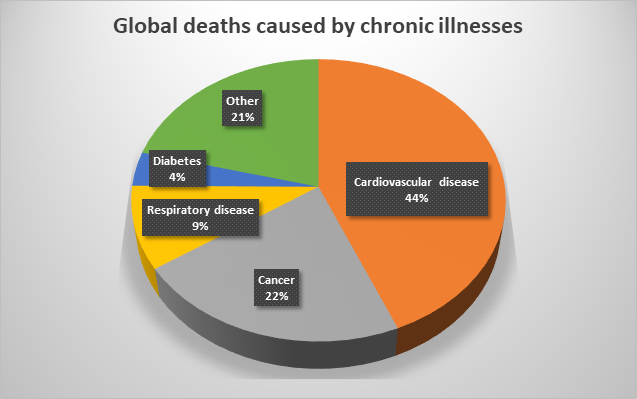 Four major chronic illnesses are the cause of eight out of ten chronic deaths. Data: WHO. Graphic: Nicolai Dandanell.

A common characteristic of the four major causes of the chronic illnesses seen around the world is the fact that smoking is one of the major risk factors for all of them. Thus, if you want to prevent developing a chronic illness, it is a good idea to seek help to stop smoking.

Some chronic illnesses can be a positive indication

Why? Because we can help find research projects for your disease. In the meantime, you'll get important information and health news matched to your health profile. Your personal information is stored only for research purposes.

Wait!
It only takes 2 minutes.
Do you want to be able to join research projects?
Free and non-binding · more than 65.000 members
Yes, sign me up!
Maybe later

Become a part of Health Panel

The goal of Health Panel is to improve health through research, but we need your help to do so. You can help by signing up for Health Panel and thereby possibly become a participant in research projects. We will only contact you if your health profile is consistent with a current research project. All research projects are pre-approved by the respective  Independent Ethics Committees (IEC) or Institutional Review Boards (IRB).